I published the article, Weapons Training, on Medium after reading Molia Dumbleton’s short story Top 7 Bible Facts. I encourage you to read her story as well. (The link is in my article.) The article explores the reasons why drilling Christian students with activities such as “sword drill” undermine their understanding of the Bible. 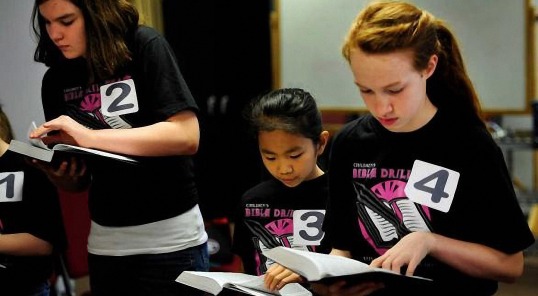 Merry Christmas, and peace to all.

Will be back late January.

Hats off to David Boudia, not because he won Olympic Gold (or rather not just because he won gold) after barely squeaking into the semifinals in platform diving. Rather for a comment he made after the qualifiers.

I have long forgotten the exact question, but he basically said he was content with the results whether he won or lost because God was in charge of the world.

This seems like a strange comment from an ultra-competitor, especially in contrast to the sentiments of Leo Durocher (“nice guys finish last”) or Vince Lombardi (“winning is the only thing”)1. Lombardi claimed he was referring to the will to win, that you can't win if you're willing to accept defeat. Boudia's comment certainly implied (at least at the time) he was fine with defeat and lacked the will to win.

Watchman Nee was very popular with charismatic and Pentecostal groups in the seventies. One of his core ideas was that believers need to learn to be at rest. A key element of that was to be at peace with the world, rather than trying to actively change events. This may sound suspiciously Buddhist, or even Zen, but even Jesus had to remind Judas that the problems of the world never end and it was acceptable to live in the moment.

God's plan includes us, but we should remember the design of the universe is not building to our lives.

1Lombardi claimed he was misquoted. If so, he misquoted himself often and to the press. There is still debate about the original source of the citation as well, but when winning is everything, and the only thing, stealing someone else's quip is acceptable. back

One of the worst feelings that can happen to a writer is the feeling you have nothing left to say. Fortunately that has never happened to me because I have been a gifted prevaricator since childhood.1 As a Baptist Preacher’s Kid (BPK) I learned to polish my prevarication skills as one of the four most important rites of childhood.

The other three rites are answering the invitation to get salvation, baptism, and rededicating your faith once you discover cigarettes, beer, girls, playing doctor with girls, vandalism, first base with girls, second base with girls, dating more than one girl at once, hard liquor and all the other events that constitute the important rites of childhood for other boys. (I can’t answer for girls even though they can be BPKs as well.) The more traditional rites can be experienced but not celebrated or someone will rat out to your minister dad if word gets around.

When you’re BPK, word always gets around to your minister dad. It seems there is someone waiting to rat you out, whether maliciously or inadvertently, and sooner or later that word gets to the deacons who can’t wait to spring it on him during salary negotiations. In case you haven’t guessed, Baptists don’t let moms be ministers because the Bible tells women to keep their mouths shut in church. 2

The bright side of getting busted is that you get to repeat the rededicating your faith ritual more than once and, if you really have connections, multiple declarations of rededication can earn you a second baptism. I had the honor of three.

No, four. I forgot about Patty Kelso from Houston whom I met at church camp. At the end of a service one warm summer evening, the choir sang “Oh, why not tonight?” and she said the same. How could any boy resist an invitation like that?

I intended to keep that fact between me and Patty, but she told a friend who had a friend at my church and a few weeks later I felt compelled to rededicate my faith. This one earned me another baptism because Dad wanted to make sure the deacons couldn’t use it as leverage during the next salary negotiation.

It may seem to readers with no experience as fundamentalists or evangelicals that learning to prevaricate shouldn’t be included with the other three rituals of the BPK childhood. Especially since it breaks one of the ten commandments.

This is because they weren’t raised as fundamentalists or evangelicals. Prevarication isn’t lying if you do it for Jesus. In fact, it is important for BPKs to learn to prevaricate so that their BP dads (BPDs) don’t have meltdowns when they confront BPKs about certain stories they heard from the deacons during salary negotiations and become so angry they jeopardize their immortal souls.

Baptists believe once saved always saved, so technically BPDs couldn’t lose it so badly they jeopardize their souls. But, out of Christian love, their BPKs should do everything possible not to put God to the test.

Besides, BPKs need to learn to prevaricate so they can learn to embellish their sermons when they become BPDs themselves. Once you accept the call from God, not only is it perfectly acceptable to incorporate the stories that once upset your BPD into your own sermons, you have to make your deeds sound even more dastardly to prove how much you needed the grace of God.

Every time you and a buddy snuck a beer from his his dad’s refrigerator will become a drunken binge with the Hell’s Angels while carrying heroin over the border. Every trip to second base with a girl on the debate team became a night spent in a drunken stupor surrounded by hookers in Mexico. The pool game you won from a hustler by clearing the table for the only time in your life and without knowing how you did it becomes a gambling career spent on the run from the Mafia.

So lying is not only Christian, it’s essential to the ministry. And that ministry includes reminding Americans how much they disappointed God by electing Moslem presidents and letting homosexuals marry. I don’t have any such excuse because I am neither minister nor Republican. But, ironically, nothing in today’s post is a prevarication.

I did repurpose this from another blog (if you don’t understand, maybe you should read footnotes). But early Christians repurposed the Gospels four times so I hope you’ll forgive me.

1And the fact that I can grab columns from a different blog and repurpose them here. The odds that readers follow me simply because I am a good writer is fun to think about, but not convincing even when my ego is at it’s most inflated.back

2That right is reserved for liberal women who tend to be Episcopal or Presbyterian and therefore on the fringe of God’s favor, or Pentecostals because nothing stands in the way of a Pentecostal who can draw crowds and donations. back

I am taking a short break to focus on a paper for the upcoming conference for religion and spirituality in science in society and to finish corrections on a book for fans of another blog. I will be back mid-February unless something really outrageous happens during the upcoming primaries. Although I can’t imagine things being more outrageous than they’ve already been.
Be gracious and kind to each other.