Seriously, Maddy Blythe, an outstanding middle school defensive tackle can't play for Strong Rock Christian School in Locust Grove, Georgia this year because the school's CEO is afraid the boys will have lustful thoughts about her.

I don't know which is more disturbing, the fact that a school principal calls himself a CEO or that he's worried that the boys in the middle of a pile up with twenty one other boys and one girl, all in full field gear, will have lustful thoughts. Have they trained their young Christian men that poorly that the pre-game prayer and fist-pumping, chest-pounding, head bashing violence will suddenly be undone by their penises?

If that's the case, don't blame the girl.

It's not as though they're throwing Maddy naked into the showers with the boys. She has her own dressing room. And she's not exactly lining up in Fredrick's of Hollywood's latest ensembles. She's dressed just like the boys, in full football regalia, which is to say about as sexy as watching Robert Downey Jr. dress like Iron Man. 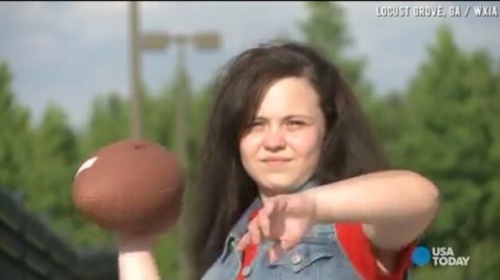 Beware Christians, this girl could seduce your son.

I've seen Maddy interview on television with some of the boys from her team. They say they feel about her as though she's their sister. Why doubt them. Especially when they have cheerleaders running up and down the field kicking their legs high up in the air to lust after? I went to middle school and high school. Those little girls throw themselves at football players like locusts after honey. Who needs a defensive tackle dressed in shoulder, hip and knee pads to stir their lust?

If the Strong Rock Christian CEO is so worried about young girls stirring lust in his young Christian ball players, why not get rid of the cheerleading squad?

Come to think of it, doesn't it strike you as strangely Freudian that a Christian school would even allow their young boys to be ball players? And while we're on Freud and transference, why is the CEO so obsessed with young boys obsessing over girl ball players, when no one else seems to see a problem?

See here's the thing about suppressed sexuality in young Christian men: In the Bible Belt, supervisors and CEOs turn a blind eye to covert sexual aggression all the time. Being raised Baptist Preacher's Kid (BPK), I was rather naive sexually. My parents suggested to me every day in every way that any sexual overtures toward women, even holding hands, would make them hate me forever. It took me years of missed opportunities to discover that was the worst kind of Christian nonsense.

But as I did begin to date and become more comfortable with women, my girlfriends told me the many tricks Baptist boys used in church camp and Sunday School to cop a feel for Christ. I won't detail them here, but I was amazed to hear how many of the boys my parents pointed to as the example I should follow (especially when I disappointed them) had managed to squeeze a breast for Jesus and come off appearing perfectly holy in the process. The girls knew, of course, but they also knew it was pointless to say anything because no one would believe them.

So, Maddy, trust me. The footballers don't need you on the field to fuel their desires. Someone (I won't say who) is simply using you as the excuse to cover up desires they wish to hide from the world.