Merry Christmas, and peace to all.

Will be back late January.

I had planned on signing off until after the New Year with a message about the season of peace, but a shooter at Sandy Hook Elementary in Newtown, Connecticut put an end to that. Even then, I didn't see the need to post about it until the American Family Association and Mike Huckabee decided to drag God into it.

There could be a reasonable debate about the shootings, but that isn't going to happen. Nonetheless, the discussion should be centered around the nation's gun policy (or lack of it). But, as always happens after this kind of disaster, someone claiming to speak for God wants us to know that God had a hand in the events.

I suppose this shouldn't come as a surprise. The idea that God is all-powerful, all-knowing and present every where in the world pervades Christian thought, even though it isn't a Christian idea. The idea originated with Aristotle as a description of an impersonal prime mover. The God of Jesus is powerful, but, more importantly, he is all loving.

In the Jewish and Christian scripture we do see the belief that God's hand is at work in nature. But the view that God controls every event is a reach. Furthermore, the notion that God punishes those who turn their back on him is a common theme, but in the Tanakh he punished nations for their sins. He doesn't single out innocents.

Nonetheless, the Christian Right is back again with two different theories about God's role in the massacre. Bryan Fisher, of the American Family Association, offers the “gentleman's theory,” which claims that God doesn't intrude where he isn't welcome. Since God isn't welcome in public schools, he simply watched from the sideline like any gentleman.

We can thank Mike Huckabee for the more traditional interpretation. God punished those kids because prayer is banned in schools.

Of course, those kids had nothing to do with the decision to ban prayer in schools. Sending a crazed assassin to punish them for the actions of the Supreme Court seems to imply that God has a sick sense of justice or he isn't very competent. Nor is prayer banned from schools, only mandatory public prayer. Nor is God banned, for that matter. Christians believe in a personal God who walks beside every believer at every moment of their day. There is nothing in the Supreme Court decision that forbids that.

In fact, if Jesus walks beside believers, there is nothing the Supreme Court can do to stop him.

I forgot the third theory. Westboro Baptist Church contends the children were murdered because Connecticut embraced gay marriage. In the words of one tweet, the members of Westboro will “sing praise to God for the glory of his work in executing his judgment.” Another tweet claims, “God sent the shooter in small first taste of coming wrath for fag marriage.”

There is this theory: The gunman is responsible. The people who allowed him access to guns facilitated. Instead of trying to hold God or liberals accountable, hold him accountable first.

If there is any war on Christmas, Christians are conducting it.

Why is it that no one wants to talk about the subversion of Christmas? We're so focused on the war that we forget the real danger is the Fifth Column, a subtle and insidious element at work to erode the foundations of our faith.

What is that Fifth Column? We are. Every time we drop a dime on a Christmas gift. Nor do I mean Santa Socks, Angry Bird Ring Toss, Star Wars 7 Pre-release Action Figures with Working Prototype Weapons, or the Ultimate iPad Christmas App and its Android knock-off. Or shopping at Wal-Mart where your dollars are recycled to China and Union-busting anti-labor initiatives instead of paying the workers a living wage.

I'm talking about buying things from Christian vendors as well, many of well-meaning, and others out to make nothing but a buck and all geared for the cash crop that is Fifth Column Christmas. I browsed the lists of recommended Christian gifts and most of them boiled down to Bibles (you can never have too many of those, even though you need only one and early Christians managed to get along without one at all), CDs, DVDs and Christian books, most of which have more to do with promoting agendas (even agendas I approve of) than Jesus.

Here are a couple of suggested Christian gifts:

Perhaps my favorite recommended gift would be the Christian Weekend Retreatfor $150.

It doesn't matter where you turn, Christmas is about spending money. As much and as often as possible. Christians can fool themselves into believing that a genuine leather Scofield Reference Bible with Concordance, Maps and authentic photographs of the crucifixion and resurrection is a Christian act and not an act of consumerism, or that a red and green sweater with wreaths and Christian cross patterns is a gift Jesus would give, but the Gospels suggest differently.

To Jesus, the act of giving requires a sacrifice. And it was something you do year-round. The Christmas holiday we celebrate was actually campaigned for by businesses to boost sales, much like Thanksgiving, Easter, Valentines Day and parent days. This may sound cynical, but you can't imagine any of those holidays without their connections to commerce. Each, in fact, has its own commercial symbol whether it be bunnies, cupids, turkeys or men in red suits.

There are charitable gifts available. Oxfam allows you to give sustainable gifts to people in developing countries in the names of your friends and family members.

Redefining Christmas allows you to donate to friends' and family's favorite charities.

There's no guarantee the money will be spent completely as you want. For instance, giving to Samaritan's Purse for their sustainable as well as evangelical projects. But they also donate monies raised to undermining gay marriage rights. Would I give a present to my evangelical family through them even though I wouldn't even buy a chocolate peppermint Christmas shake from Chic-Fil-A? In a heartbeat. They still do good work. I can give an equal amount in support of same-sex marriage to another organization, and my evangelical family members would appreciate it far more than they would a gift through Oxfam.

Unfortunately, even special charitable gifts miss the point. Spending money you would have spent anyway requires no sacrifice, even if it is to a good cause.

I would like to be positive about this. The real truth, however, is that the Fifth Column forces of consumerism, sponsored in part by the Corporate Christian Complex, have too strong a grip. Our kids don't understand the gift of sacrifice. If they haven't received every disposable, breakable junk item on their list, they feel they were sacrificed to a higher principle. And too many friends do as well.

I would never tell you what you should do at Christmas. It is your holiday to celebrate as you choose. Even if you choose not to celebrate at all. But before we continue to escalate the war on Christmas, perhaps we should ask ourselves if the holiday has anything to do with Jesus at all.

So the real question, I suppose, is WWJD? And the surprising answer is probably that he wouldn't celebrate Christmas. His birthday, after all, was most likely in the spring and, as far as I can tell from the Gospels, he never celebrated when he was with us.

The annual season for the war on Christmas opened this weekend. Technically, the skirmishes started a few weeks ago in Santa Monica and Alsip, Illinois. However, it's never official until Bill O'Reilly issues the declaration. 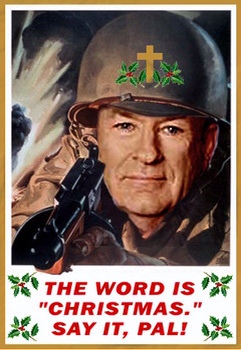 The Christian Right believes they have an exclusive right to display their imagery during the upcoming season. After all, Christmas is a Christian holiday.

Unfortunately for Christians, other people celebrate their own holidays this time of year, and have been doing it far longer than Christians. The Christian Right forgets that their particular day is privileged only because the Federal Government, whom they believe conspires against them, recognizes only their celebration as the official holiday.

Christmas is the only religious holiday honored by the United States. Christians like to claim Thanksgiving as theirs too, but Thanksgiving is really a celebration of ecumenicalism, if it has any religious significance at all. Thanksgiving recognizes an event in which Native Americans, who revere the spirit world, came to the aid of Christians who might not have survived the winter in spite of our all-powerful God.

(I was always told that God sent the natives to help the Pilgrims, and I believe he did, but the irony of God sending pagans to rescue believers is lost on the story tellers.)

Of course, New Year's Day is the United States' official version of a purely Pagan holiday, but Christians and the failure of collective memory have managed to white wash any such religious connections today.

I was told when I was a child that Christmas was the umbrella for Chanuka. In fact, Christmas was supposed to be the time when people of all faiths set aside their differences to celebrate a day of peace. That day of peace is gone.

Christians should be grateful that theirs is the only religious celebration officially recognized by the United States. Instead, many of us seem to believe the very government they hate is punishing them by making room for all Americans to celebrate.

Speaking of the war on Christmas, I am finishing revisions this weekend on my Christmas (holiday) novella, The Worst Noel, a spin off of my novel Raising Hell, in which Pilgrim must save a town from its own outbreak of the Christmas wars. It will be on sale for Nook, Kindle and iBooks in time for the holidays (which you will find ironic given the topic of an upcoming post).